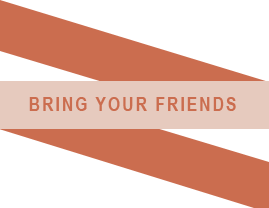 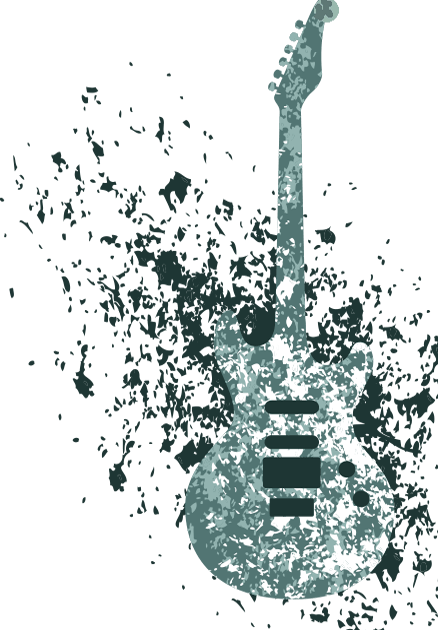 I started playing music in 1964. I have been playing for 53 years and still do. My first band was The Full House in Montgomery Al. From 1967-1968. After moving to Florida in 1968 I joined “ In The Beginning” with Pete Lane,Jon Fisher and Ken McCoy, I played with this group until summer of 1972 all of the while attending UCF. 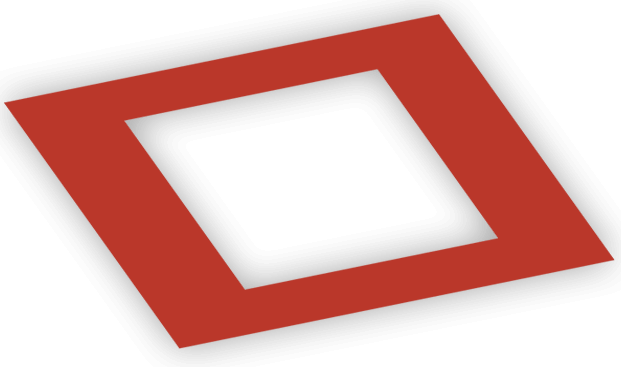 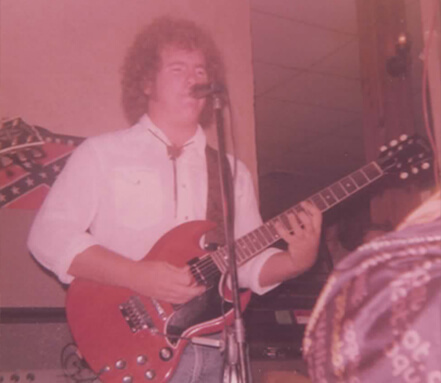 I started playing music in 1964. I have been playing for 53 years and still do. My first band was The Full House in Montgomery Al. From 1967-1968. After moving to Florida in 1968 I joined “ In The Beginning” with Pete Lane,Jon Fisher and Ken McCoy, I played with this group until summer of 1972 all of the while attending UCF.

In 1973 I formed “The Benson,Stanley,Shannon Band” with childhood friend Chris Benson and new friend Tom Shannon. We first played The Pitcher House in Fern Park Fl. In 1973, we then added drummer Pat Hardin in 1974. Chris Benson had to return to Med school in Alabama so we needed a guitar player and Randy Kline joined us,shortly after we replaced Pat with Howe Holt on drums. At this time we changed the name of the band to the SOMF City Band. I played with SOMF City until 1980. After a year away from music I joined “Maiden Voyage” with longtime friend Tom Oliver in 1981. after several personnel changes we formed Cactus Jack and the Cadillacs in 1982 and we are still playing to this day celebrating 35 years together in 2017. Music and the great friends I have made playing music has been a very important part of my life for six decades. SOMF City was where I learned to entertain and make a living playing rock and roll. And it's not over yet! As I now say “Your never to old to Rock n Roll” 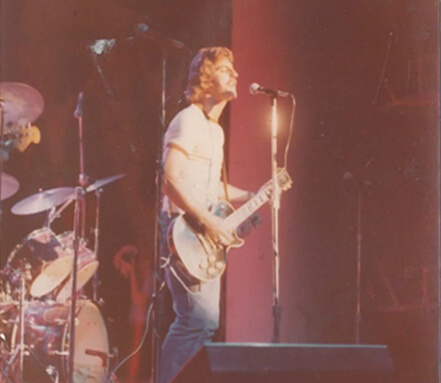 I was born a poor white boy on March 10th 1956 and lived in a trailer in rural Maryland. My father was quite the entrepreneur and within about 7 years I was living in the coolest house in our town. I played piano for vacation Bible school and sang at the age of 8 years old at our Southern Baptist Church. In 1968 we moved to Florida and in 6th grade I formed my first band for the school talent show. The name of the band was The Rubber Band. 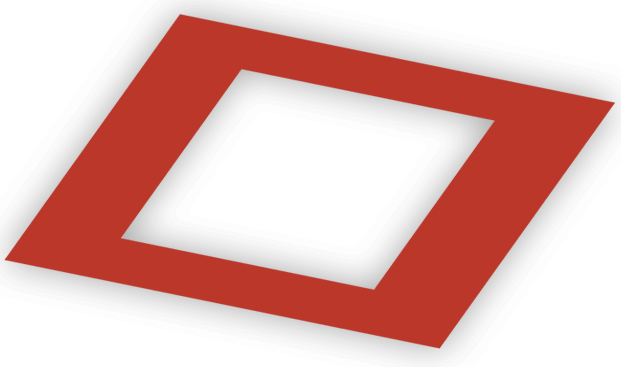 My uncle Dave affixed the name of the band on the front of my Sears Silvertone amp and I still have it to this day. Around 1970-1971, I met up with a like-minded Beatle freak named John Link who has had the band the Redcoats for about half a century. I still record with him at his studio. It’s weird how many of my songs sound Beatlesque or share common titles or lyrics. In the summer of 1974 I had been accepted to the University of Florida so I ran an ad in paper for a bass player. The audition took place at John Links parents’ house. The bass player’s name was Tommy Joe Shannon. After we played he told me of his wild band and a crazy guy named Cactus. The name of the band was SOMF City which was named after their unchartered fraternity at FTU. He said “we’re losing our other guitar player, why don’t you just join our band?” They were playing at a place called The Pitcher House which was 300 yards from my dad’s go-kart track. It was there that I met Cactus. The guys auditioned on stage and the rest is history. The next week we played in a picnic for a Catholic Church at Camp San Pedro and it was the most fun I have ever had in my life. We had a good run of about 7 years and I was going to do something different and in 1980 I joined a band called Bullseye with Daryl Hughes, Cap Pierce who unbeknownst to me was my wife’s half-brother, and Randy Nichols. There was a lot of talent but the road was hard. Daryl got a house gig in Tampa at a place called Robicontis with a group called petty cash and then got me the job. I moved to Tampa for four years. After that ended we went back on the road with a band called Stiff Kitten for 1 year. I quit the band, got married, had my son, and then my dad playing the part of prodigal sons dad took me back at the go-kart track. Cactus Jack had been playing with his band the Cadillacs ever since I left town and still is till this day. When I got back to town I was working the go-kart track and put a 3 piece band together with Cap Pierce, John Krain, and we did weekend gigs while I was working the track. Eventually Cactus, John, Bird, and I started playing occasionally again as SOMF City and we called them “reunions”. We still play to this day 43 years later. Cactus is the originator of the band, John Krain is the 3rd drummer but has been there since the beginning, and Bird is our most prominent and longest bass player to date 43 years later. The Devil is beautiful and can play beautiful music. I think the amount of musicians that started in church and ended up in bars is about 97 percent. I am very lucky to have wound up with really nice, good guys who were brought up with good families. SOMF City respected their elders, SOMF City never made fun of fat people, but we did have all you can eat contests at every KFC up and down rout 1. It cost $1.99, the same price as Author Teachers which was the official restaurant of S.C.B. We wore jeans, t-shirts, tennis shoes, long hair, bathed daily, and watched all the soaps. It is a fun, easy, lucrative life to be able to make music with your good friends and not even care about politics. Eventually you have to grow up but in the words of Cactus Jack “You’re never too old to rock and roll”. Medical History: 2 blown record contracts, a blown c5, and to this day a messed up shoulder from wearing Les Pauls, which changed me to Fender Strats, 2 Hernia operations (1 from moving speaker cabinets, 1 from moving go-karts). That’s my BIO and I’m sticking to it.

Born in Miami Florida in the late 50s. My father was a professional jazz accordionist, had a music store and booked bands in South Florida. I started out as a vocalist in Junior High and started playing drums soon after. We closed the music store in 1975 and I moved to Winter Park at the age of 18. 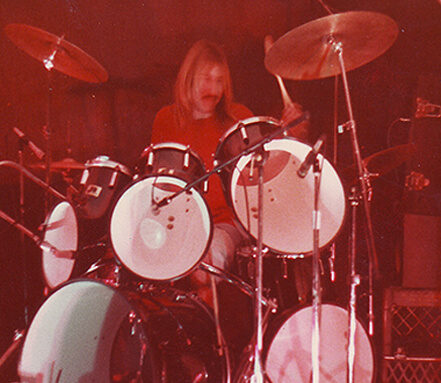 Born in Miami Florida in the late 50s. My father was a professional jazz accordionist, had a music store and booked bands in South Florida. I started out as a vocalist in Junior High and started playing drums soon after. We closed the music store in 1975 and I moved to Winter Park at the age of 18.

My first job was selling Kirby vacuum cleaners with hair past my shoulders asking housewife's if they would like a free box of Tide detergent and a free rug shampoo. As you can imagine that job did not last long and found myself playing in a couple local bands around town. I joined the somf city band in the summer of 76 after their drummer quit on stage. And the rest is history. 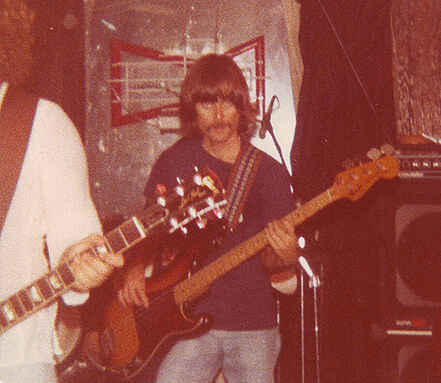 Bob 'The Bird' Cara grew up in Sanford, Florida and attended local schools. In 1964, he got the bug while watching the Beatles perform on the Ed Sullivan show; however, after his mom took him to the doctor and got some antibiotics he felt lots better. Some time later after hearing "They're Coming To Take Me Away", he was inspired to take up the guitar .

He joined his first band as one of three guitarists and it was decided shortly thereafter that he would switch to bass since he was the worst guitar player. But, he soon discovered advantages; for example, since you pluck one string at a time instead of strumming all six, tuning is not as big a deal. After playing in countless local bands with names that sound corny today, he got the call to join SOMF CIty in 1979, ultimately becoming the longest lasting bass player in the group's history. Other bands he worked with include the Sick Band and the Blind Dates. These days he plays with the Pendletones, a classic blues rock band in Central Florida. He likes to play vintage Fender basses and has a Hartke stacked speaker rig, which looks cool. 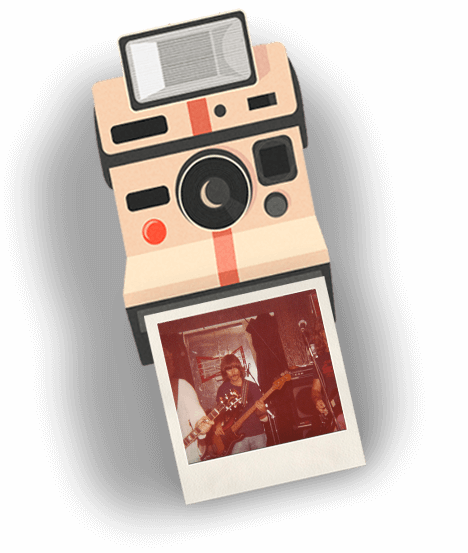 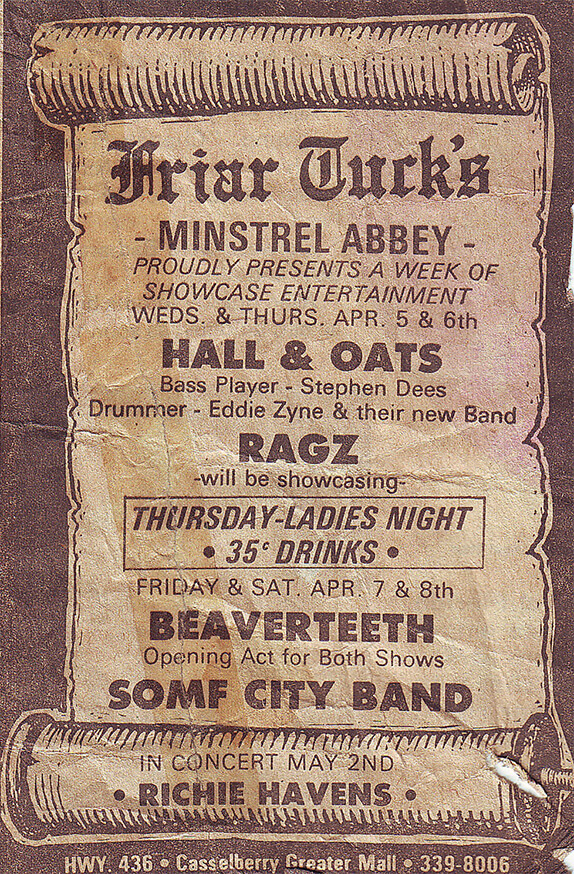